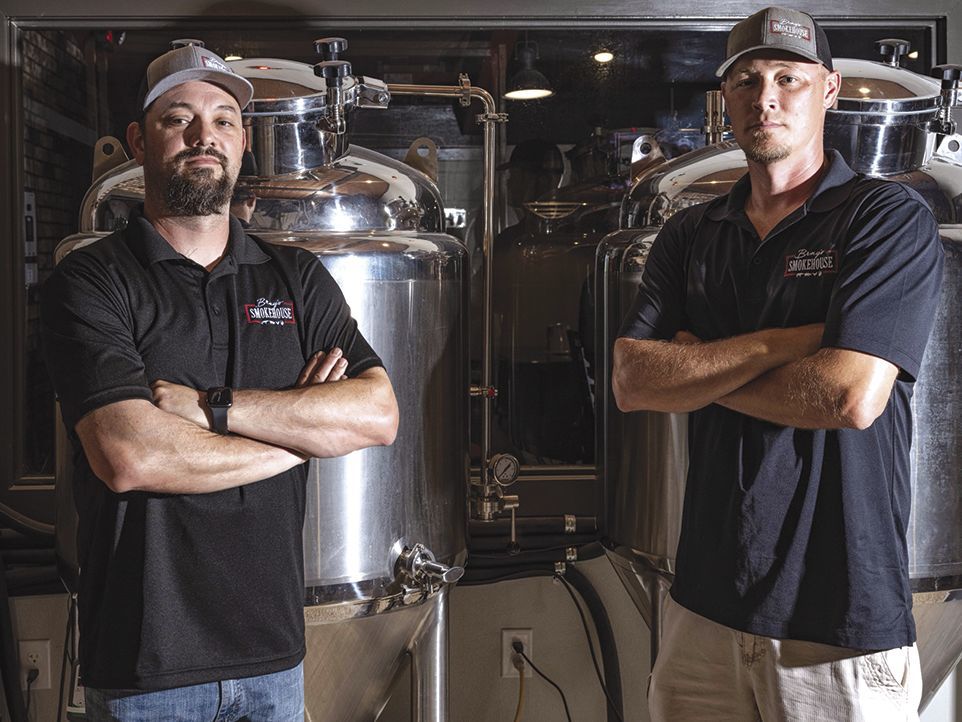 Jason (left) and Justin Bray stand in front of their brewing vats on the site of Bray’s Smokehouse. (Courtesy photo) 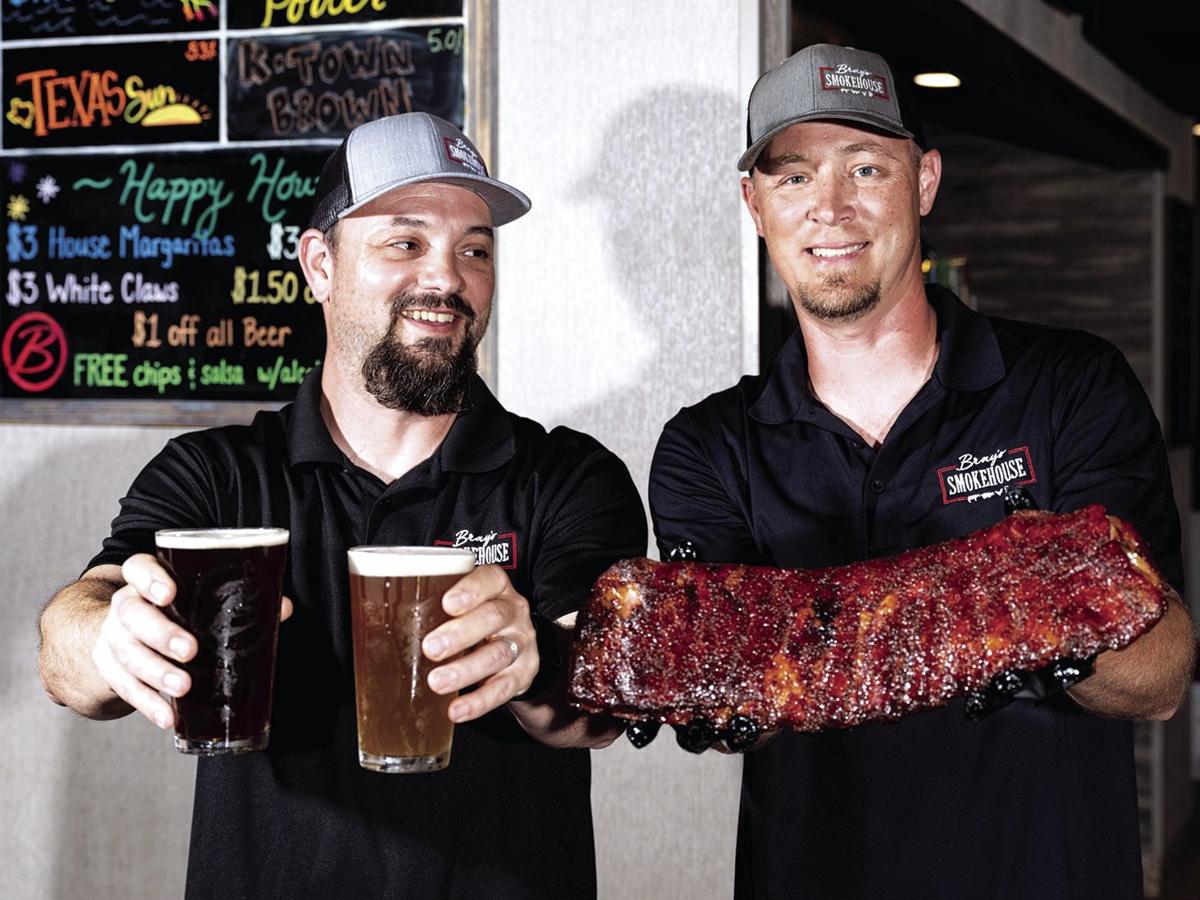 Brewmaster Jason Bray proudly holds two of his delightful craft beers as he smiles at the magnificent racks of ribs his brother Justin is displaying. 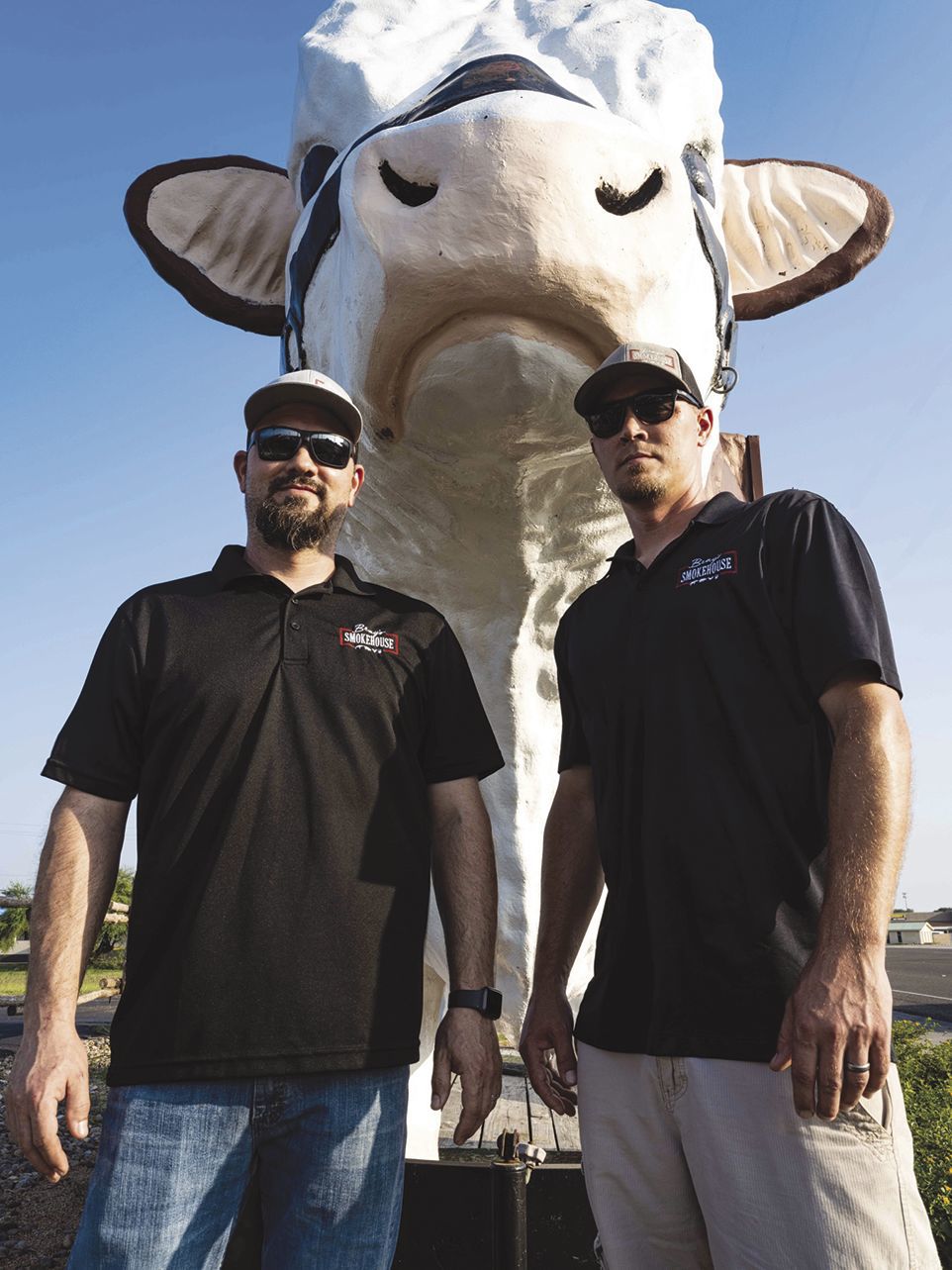 Justin Bray was thrilled when he found the iconic Sir Loin in a field in Floresville and was able to bring it back. Jason and Justin pose proudly in front of one Kingsville’s most identifiable brands.

Jason (left) and Justin Bray stand in front of their brewing vats on the site of Bray’s Smokehouse. (Courtesy photo)

Brewmaster Jason Bray proudly holds two of his delightful craft beers as he smiles at the magnificent racks of ribs his brother Justin is displaying.

Justin Bray was thrilled when he found the iconic Sir Loin in a field in Floresville and was able to bring it back. Jason and Justin pose proudly in front of one Kingsville’s most identifiable brands.

(Editor’s Note: This is the fourth story in a series of articles on economic development and why Kingsville is changing to become a community open to new business.)

One of the newest and brightest stars shining in the Kingsville retail business galaxy is Bray’s Smokehouse. Owned and operated by two hometown guys, Justin and Jason Bray, the Smokehouse opened last June to serve great food featuring quality brisket and ribs and great micro-brewed beer.

Located at 1500 Brahma Boulevard, Bray’s Smokehouse opened on June 18, 2019 to great reviews and enthusiastic applause from the community. With a menu featuring award-winning brisket and ribs along with a full menu topped off with great craft beer, Bray’s Smokehouse was sure to be a hit in Kingsville.  Make no mistake, however: the brothers earned the accolades they were given.

“I had been in the restaurant business about 20 years,” Justin Bray said at his business about 10 days ago. “I was working out of town but had given a lot of thought about trying to bring a business back to my hometown of Kingsville.”

That’s where Jason came in.

“We had been cooking brisket and ribs for a while when we decided to start entering competitive barbecuing,” Jason said. “Our first one was in 2010, and we won two trophies. In our next one we were named reserve champion. We were serious about competing and wound up winning 14 grand championships, at least that many reserve and won three state championships.”

According to Justin, it was Jason who started tinkering with brewing his own beer. “It wasn’t real good at first,” Jason joked, but he kept working on the brewing process and recipes. Jason would try different things and eventually found a recipe and a method he liked and the quality of the beer improved dramatically.

“I guess practice makes perfect,” Justin said. “I’m not sure when we realized we were doing quality barbecue and making great craft beer at the same time, but our friends were giving us good feedback and we were having fun doing both.”

The plan that had been gestating in the brothers’ minds started to come into focus.

“I wanted to do this in Kingsville—I wanted to be here,” Justin said. “This is the town we grew up in. We know the people here and the great character of the entire town. We wanted to do this ‘Que and Brew here. We thought there was an opportunity. We took a leap of faith.”

In 2018, the brothers were actively looking for property. After searching the community, they landed on the former Sirloin Stockade building on Brahma Boulevard, which had been owned by the Holt family for decades.

While they were working they needed help from the Chamber of Commerce and the City of Kingsville to make their dream and concept work. They needed ordinances to be changed and reason to be applied in order to make the investment a realistic opportunity. Chamber director Manny Salazar, city officials and fire department inspectors worked collaboratively to make the project safe, code worthy, but affordable.

“We couldn’t have done it without the help of the chamber and the city,” Justin said. “They were great to work with and they will help anyone trying to open and operate a business here. We can’t say enough of them.”

While construction proceeded during the summer and fall of 2018, Justin felt like something was missing.

One day while driving through Floresville, he found the missing link. While driving past a cattle farm, he noticed a giant cow statue in a field. He was stunned: it was the iconic Sir Loin, the giant 12-feet tall by 16-feet long model that had stood in front of the Sirloin Stockade for decades. Over the years thousands of Kingsville kids, residents and out-of-towners have taken their picture in front of the statue.

When Justin saw the Sir Loin statue, he stopped to talk to the ranch owners and offered to buy Sir Loin back. After some negotiating, Bray was able to convince the owners to sell and allow Sir Loin to return to Kingsville.

“As we neared opening, and after we cleaned up Sir Loin, we put it out front,” Justin said. “We were stunned by the reaction. Hundreds of people were standing in line to get their pictures taken. The pictures online went viral. We had brought a part of the history and the soul of this community back. We were thrilled and very proud.

“We see plenty of opportunity in Kingsville,” Bray said. “There is plenty of business to go around and the assistance of the city, the chamber and everyone else makes Kingsville the right place to be to do business.”