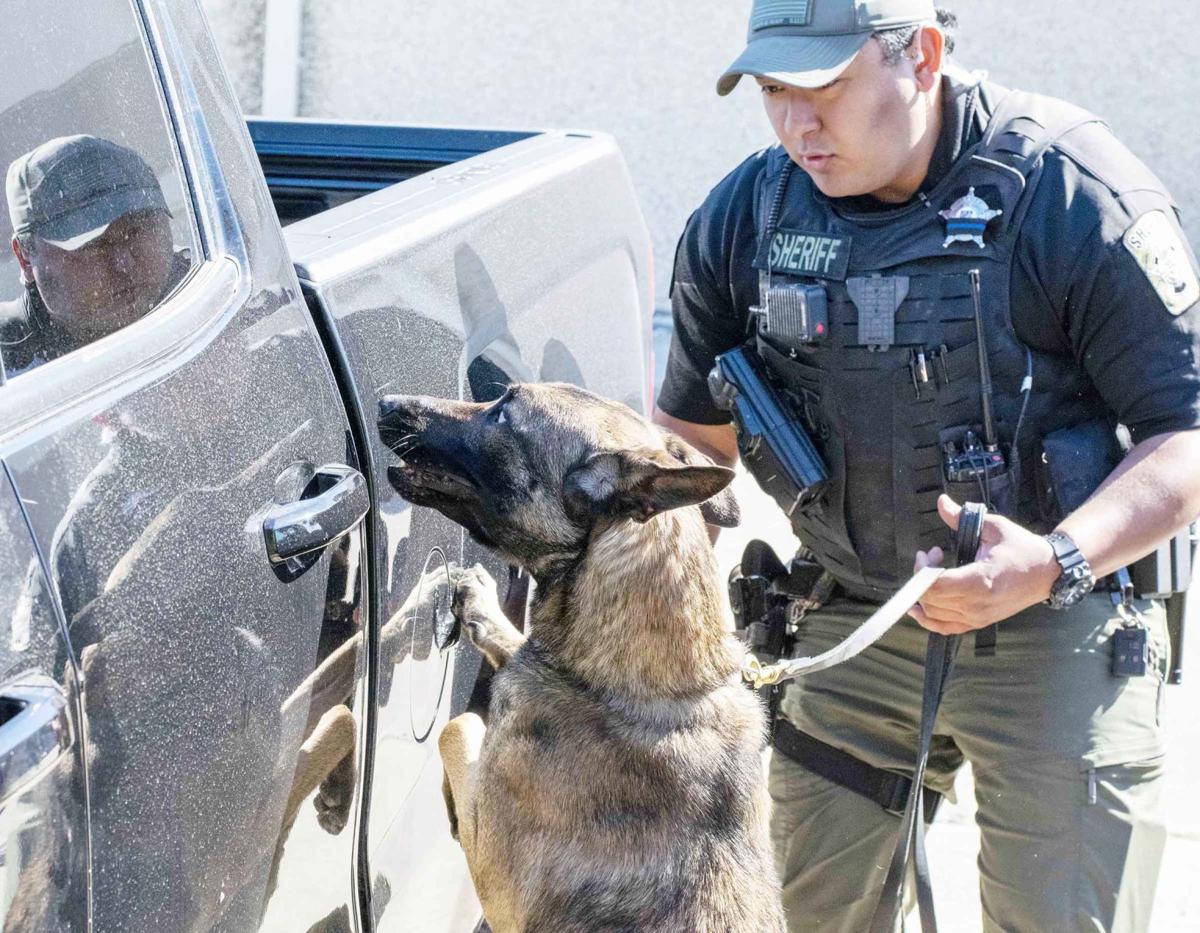 Lora, the Kleberg County Sheriff’s Office’s new K-9 officer, sniffs around vehicles as part of her training, searching for a smell to identify illegal substances. 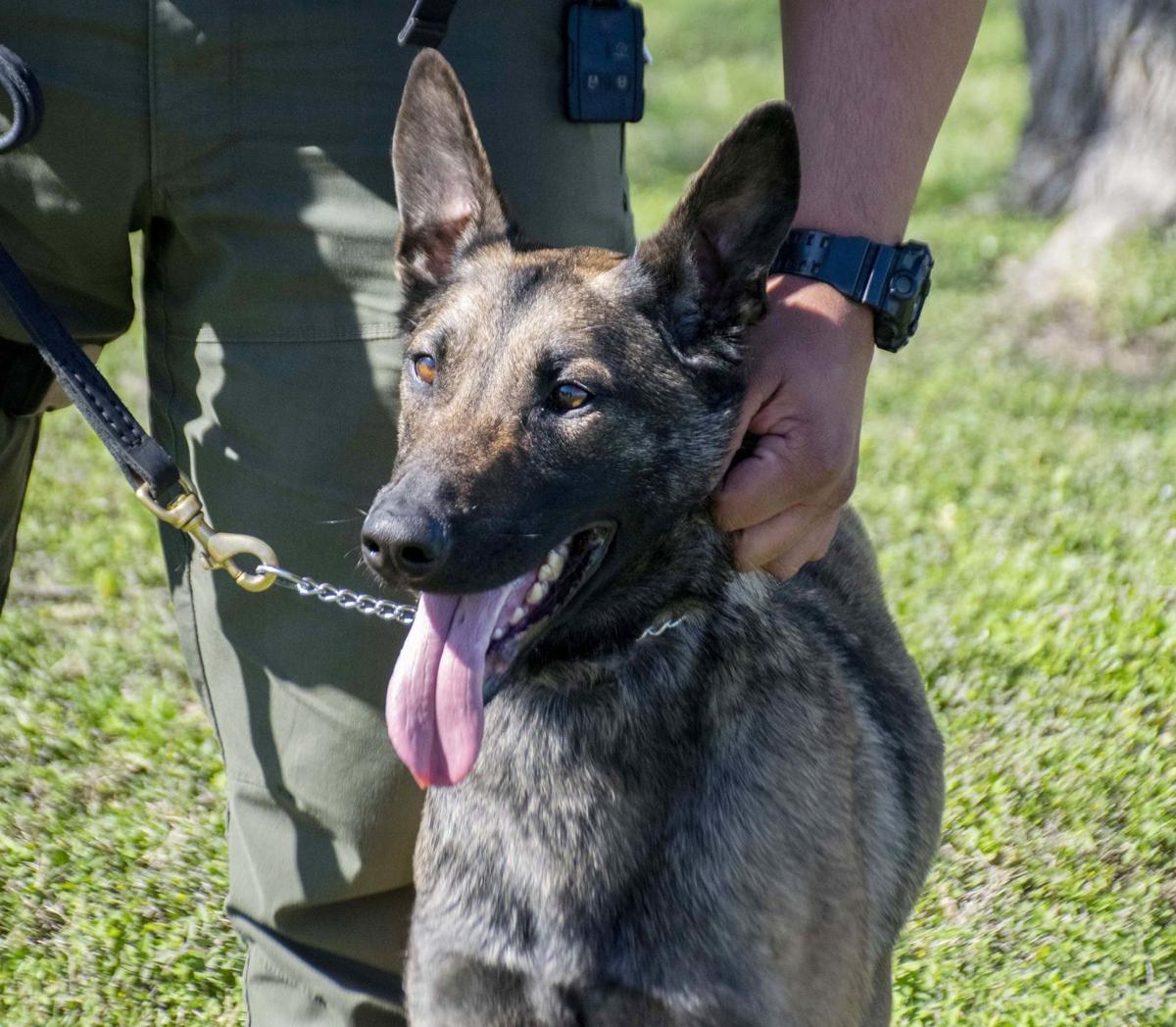 The new K-9 officer for the Kleberg County Sheriff’s Office is a Belgian Malinois named Lora. The K-9 is about one-year old and is originally from Bosnia.

Lora, the Kleberg County Sheriff’s Office’s new K-9 officer, sniffs around vehicles as part of her training, searching for a smell to identify illegal substances.

The new K-9 officer for the Kleberg County Sheriff’s Office is a Belgian Malinois named Lora. The K-9 is about one-year old and is originally from Bosnia.

The Kleberg County Sheriff’s Office has a new K-9 officer in their ranks who will help serve the community four paws at a time.

Lora is a one-year-old Belgian Malinois who has been trained and brought to Kleberg County to aid county law enforcement in identifying illegal substances while in the field.

Kleberg County Sheriff Richard Kirkpatrick said a few months ago the Department of Justice provided an opportunity with a micro-grant through the Office of Community Oriented Policing Services to acquire a new K-9 for their force.

C.O.P.S. is the component of the U.S. Department of Justice responsible for advancing the practice of community policing by the nation’s state, local, territorial and tribal law enforcement agencies through information and grant resources, according to the DOJ website.

The $8,000 grant was awarded to the KCSO and was enough to cover the cost of purchase for the K-9, Kirkpatrick said.

“We were very excited about being able to bring (the K-9) back here and provide that service for us for here in Kleberg County,” Kirkpatrick said. “There are so many things going on in our schools (and) out in our community that you know, we really desperately needed the K-9 and so fortunately we’re happy to say she’s here.”

Kirkpatrick said Lora went through a rigorous training program to learn how to identify the scents of marijuana, cocaine, heroin and methamphetamines.

K-9 deputy Gerardo Gonzalez spent the three-and-a-half week program along side Lora to prepare the two for their eventual day-to-day activities.

Gonzalez said he had always had an interest in becoming a K-9 handler while working at the KCSO, and was excited when the Sheriff approached him about the opportunity.

The program was overwhelming at times, Gonzalez said, but worth the effort, especially because Lora wasn’t welcoming of her new partner when they first met.

“My first couple of days were rough because Lora was a little aggressive with me,” Gonzalez said. “The first two days she hardly would let me touch her. And then the third or fourth day she started to be a little bit more calm and after that, it was just more like, okay, let’s learn together.”

Gonzalez and Lora spent their days at the K-9 Global Training Academy in Somerset, Texas, where they learned how to investigate different scenarios at schools, houses, stadiums and other types of venues where K-9’s may search for narcotics.

Gonzalez said their bond grew as the training progressed, and after the program was complete, the ride back to Kleberg County was exciting for him and his new partner.

Lora is now the second K-9 on the force for the KCSO, and will work with Gonzalez every day they are assigned to be working.

And in her off time, Gonzalez said, she gets to go home with him and spend time with his family, of which she is now a part.