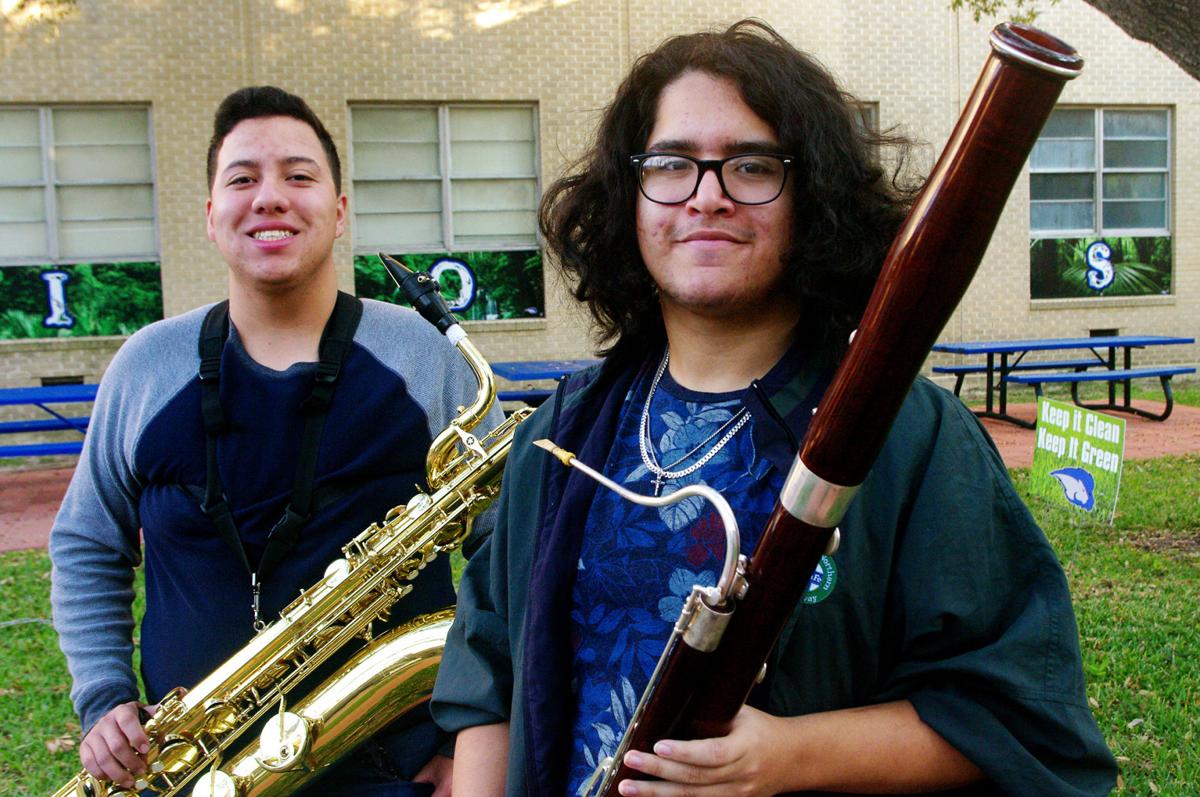 Three Academy High School students were selected for All-State honors and will be performing at the 2020 TMEA Clinic and Convention in San Antonio on Saturday, Feb. 15. Pictured is senior Aidan Cardona (baritone saxophone) and junior Sergio Soto (bassoon). Not pictured is senior Jordan Sanchez (trumpet). 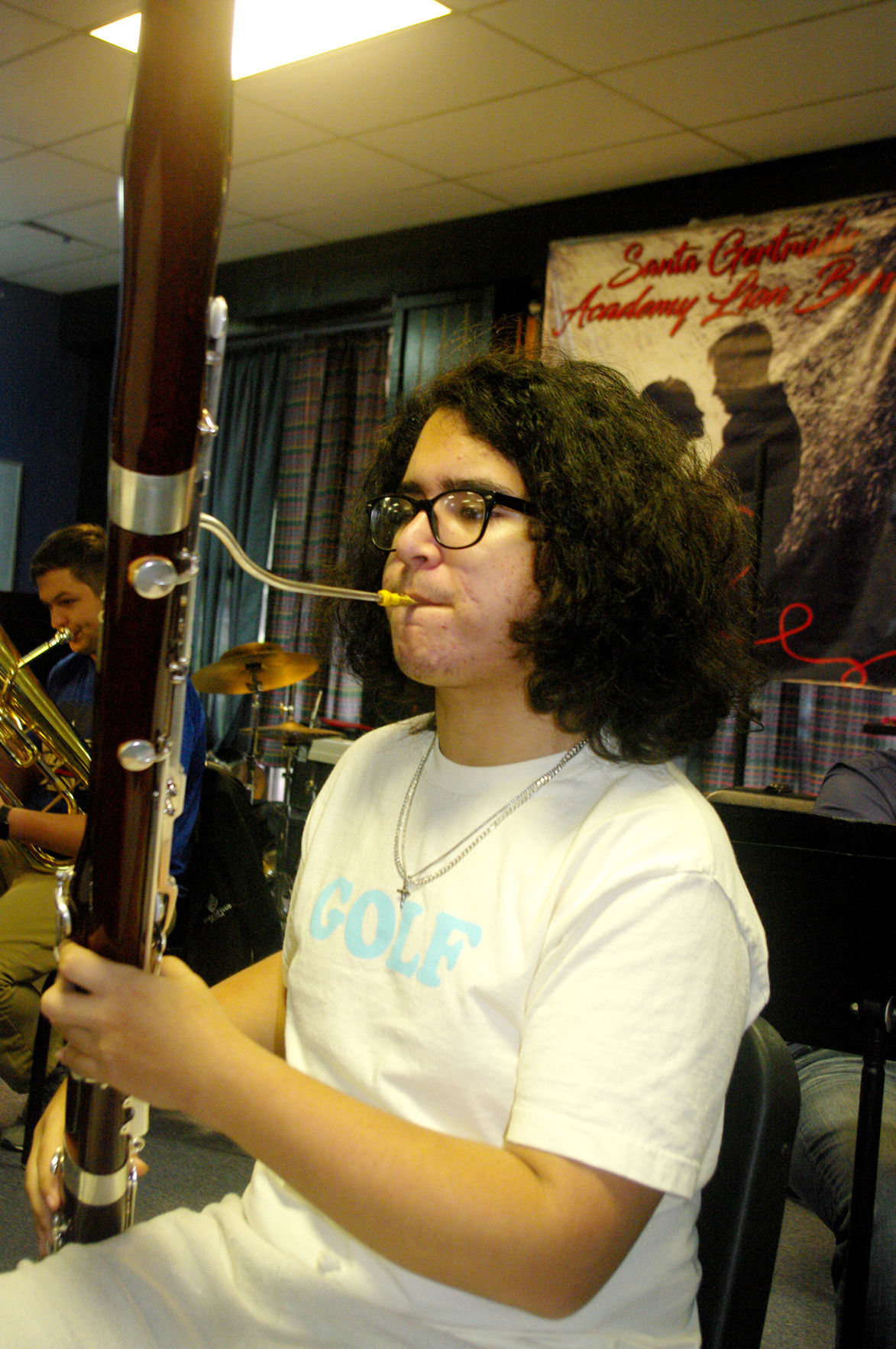 AHS junior Sergio Soto received first chair honors with his bassoon at area tryouts earlier this month and will be performing, along with two of his classmates, at the 2020 TMEA Clinic and Convention in San Antonio on Saturday, Feb. 15. 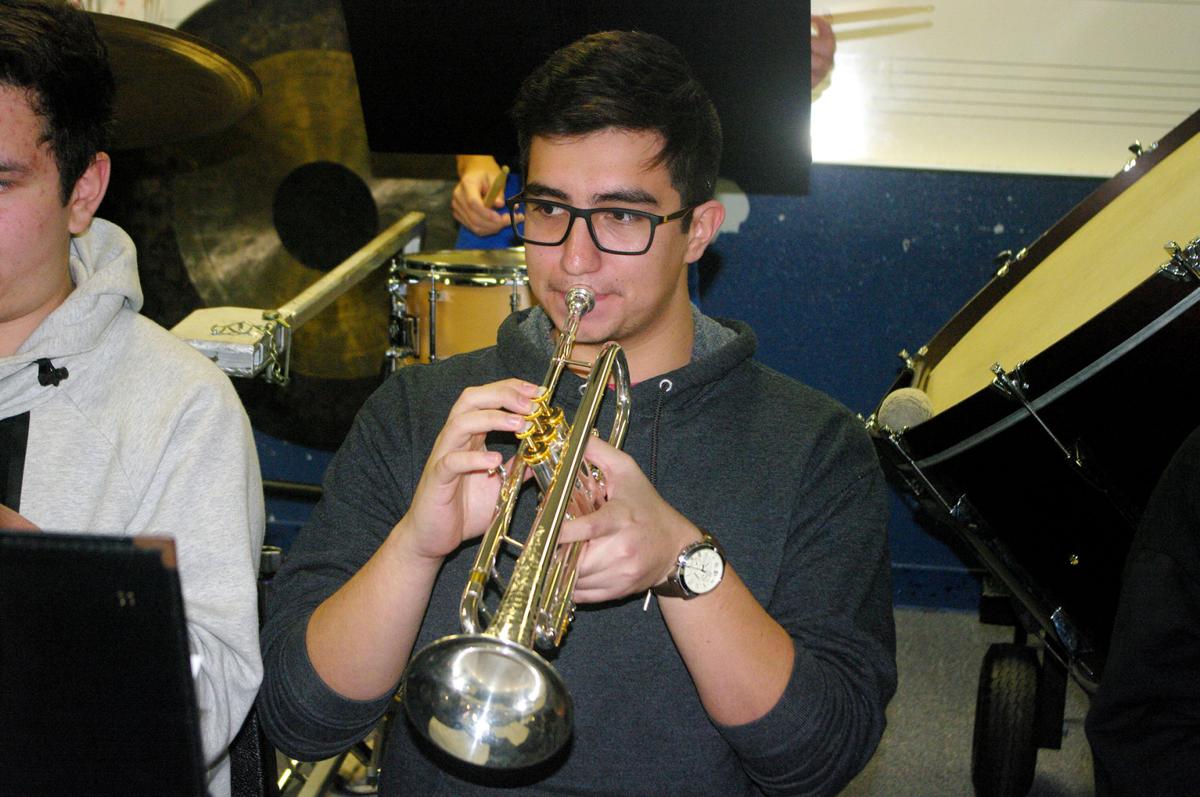 AHS senior Jordan Sanchez received third chair honors with his trumpet at area tryouts earlier this month and qualified for the All-State Band.

Three Academy High School students were selected for All-State honors and will be performing at the 2020 TMEA Clinic and Convention in San Antonio on Saturday, Feb. 15. Pictured is senior Aidan Cardona (baritone saxophone) and junior Sergio Soto (bassoon). Not pictured is senior Jordan Sanchez (trumpet).

AHS junior Sergio Soto received first chair honors with his bassoon at area tryouts earlier this month and will be performing, along with two of his classmates, at the 2020 TMEA Clinic and Convention in San Antonio on Saturday, Feb. 15.

AHS senior Jordan Sanchez received third chair honors with his trumpet at area tryouts earlier this month and qualified for the All-State Band.

For the first time in its history, Academy High School’s band will have students at state.

The school will be represented at the 2020 Texas Music Educators Association’s Clinic and Convention in San Antonio after three of its band students were selected to perform with the Association of Texas Small Schools All-State Band.

“Most schools are proud when they have one (student) make All-State,” AHS Band Director Raymond Mendez said. “So for us to have three make it is a big accomplishment. It’s a tremendous feat.”

AHS seniors Aidan Cardona and Jordan Sanchez, along with junior Sergio Soto, were selected for All-State honors this year, which is the highest accolade a Texas music student can receive in the TMEA system.

According to the TMEA website, nearly 1,800 students are selected through a process that begins with more than 68,000 students from around the state competing to perform in one of 15 All-State band, orchestra and choir ensembles.

Aidan, who was selected as first chair at area tryouts, said he was excited to have finally made the All-State Band.

“I just feel relieved that all of my hard work finally paid off,” he said.

Aidan said making the all-state band was a personal goal since entering high school. He credited a lot of his drive to a “friendly rivalry” he had with former H.M. King High School student Emilio Sanchez, a two-time all-stater who also played the baritone saxophone.

“My goal every year was to try and beat him, and that’s what honestly got me better,” he said. “We were friends, but we pushed each other to improve.”

Aidan said he was looking forward to the rehearsal and concert, even though he admitted it would be “a little strenuous.”

“We’ll be rehearsing from nine in the morning until 10 at night,” he said. “But it’s going to be fun. I’ll be with people from all over the state who have the same passion for music as me.”

With his senior year almost over, Aidan is preparing to attend the University of Texas in Austin where he will major in biomedical engineering.

“I’ve been accepted and am looking at different scholarships,” he said. “And I can still be in band. I asked (my recruiter) about that.”

Sergio said while he is thrilled to have been selected for the All-State Band, he feels more pride at being among the first in his school’s history to achieve the honor.

“I think it’s a really great opportunity for us three, but also that it sets the bar for others to strive to,” he said. “We’re the first, but we don’t want to be the last.”

Sergio said has played the bassoon since seventh grade, something he said has become “just part of who I am.” After missing the All-State Band by one spot last year, he said he began rehearsing “as early as possible” for the 2020 auditions.

“Most people start to get serious about it in maybe November or December, but I started working on it in the summer,” he said.

Sergio finished the area audition by receiving first chair honors. He said he is looking forward to the convention, especially the rehearsal which he thinks will “be tiring, but a lot of fun.”

Although he still has a year of high school left, Sergio is already thinking about his future career as either a music producer or audio engineer.

“I want to be on the production side,” he said.

Unlike his other statebound classmates, who started their music careers in middle school, Jordan waited until high school before joining the band.

“When I was in eighth grade, I was watching the Academy band in the La Posada parade,” he said. “I thought it looked so cool, and so when it became time for my freshman year, I knew I wanted to be in the band.”

Jordan said he didn’t have his best performance at the region audition in December, finishing as eighth chair with his trumpet. While disappointed, he said the outcome left him even more determined to make it to state.

At the area tryouts, Jordan’s extra practice paid off as he received third chair honors. He said being selected for the All-State Band is “a great honor,” but he also realizes that he still has a lot more work to do before the convention.

“I let loose when I made it, but now I have to tighten it up again,” he said.

Jordan said he is most looking forward to the rehearsal as he said it will be an opportunity to “learn new things.” He said he plans to become a music educator in the future, and enjoys both learning about and teaching music.

“Music is great, and I want everybody to see it like I do,” he said.

The 2020 TMEA Clinic and Convention will be at the Henry B. Gonzalez Convention Center in San Antonio from Feb. 12-15. Students performing in All-State bands and choirs will be rehearsing every day leading up to the Saturday concerts.

The ATSSB All-State Concert Band will perform at 9 a.m. on Saturday, Feb. 15 in the Lila Cockrell Theatre, located on the street level near the Grand Hyatt on Market Street, under the direction of David F. Wilborn of Texas A&M University.

The ATSSB All-State Symphonic Band, under the direction of Eugene Corporon of North Texas State University, will follow in the same theatre beginning at about 10:10 a.m.