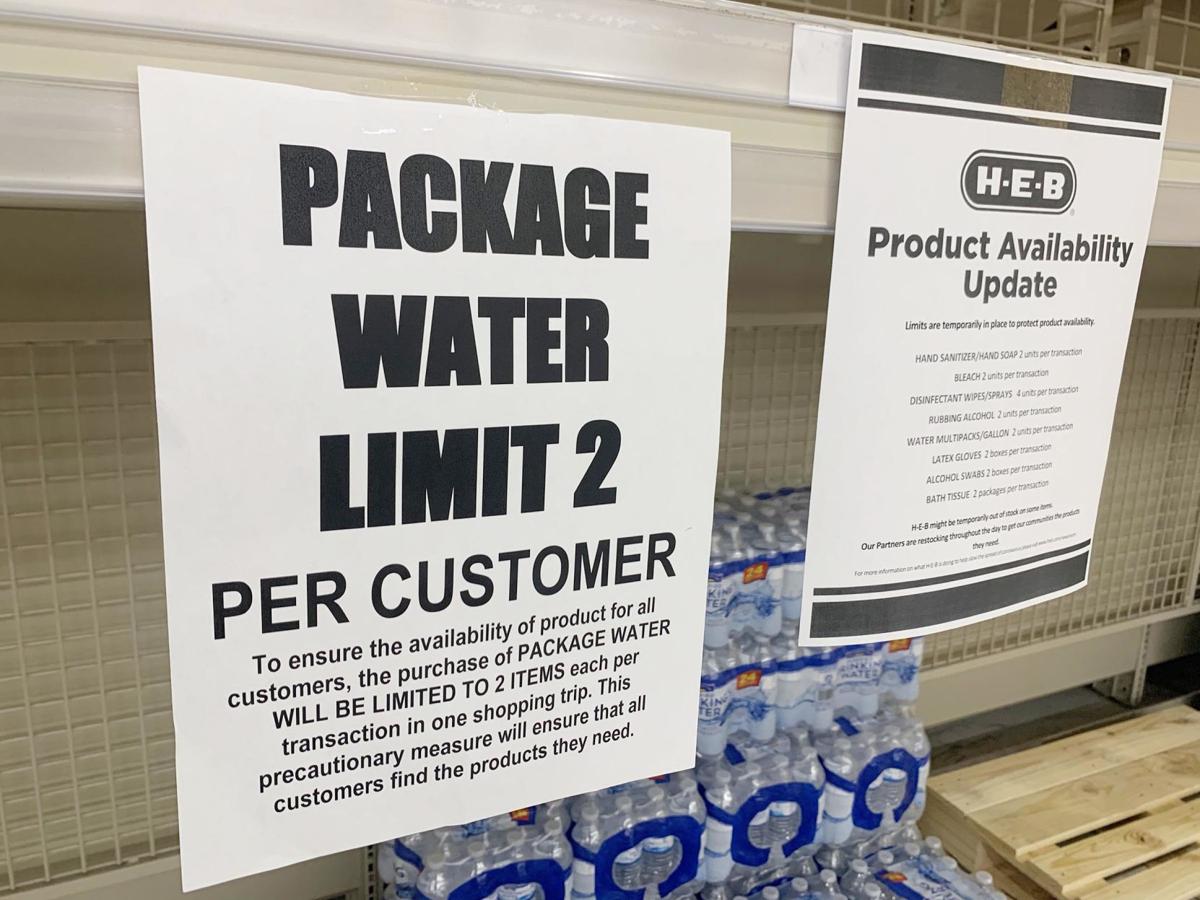 Multiple products inside HEB are limited on a per customer basis, which includes both food and non-food items. 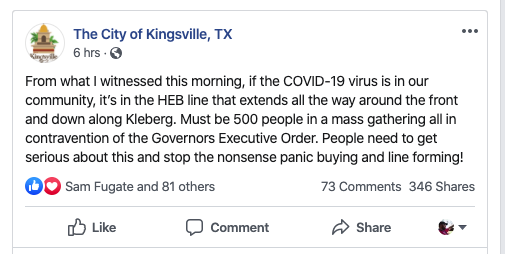 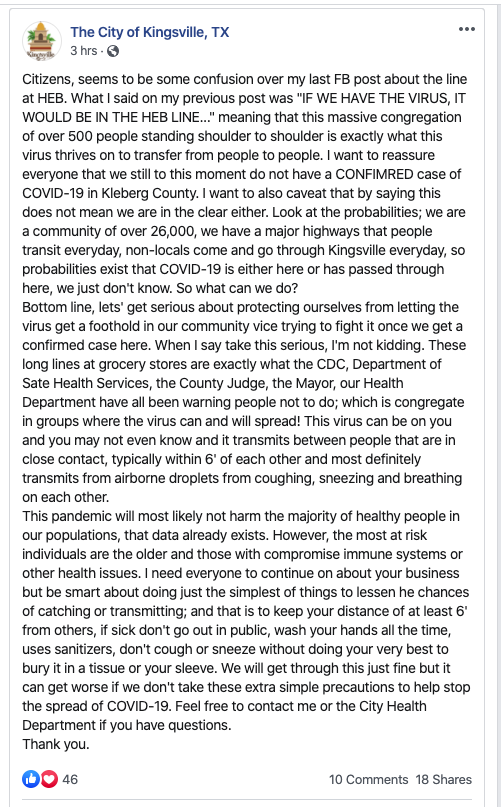 Multiple products inside HEB are limited on a per customer basis, which includes both food and non-food items.

As long lines continue to form every morning in front of grocery stores in the area, City of Kingsville and Kleberg County officials are working to ensure the safety of shoppers as they wait to enter stores.

On Friday morning, Kingsville City Manager Mark McLaughlin and Kleberg County Judge Rudy Madrid said they will try and implement safety measures to limit the distance between customers waiting outside in the early morning with the help of law enforcement.

“(Kingsville Mayor Sam Fugate) and I came to an agreement that the (Kingsville Police Department) would start patrolling the HEB and ensuring the safety of all citizens by keeping (shoppers) six feet apart,” Madrid said. “And I have asked (Sheriff Richard Kirkpatrick) to take care of the Walmart side (…) We just want to ensure that for their own safety.”

McLaughlin said the efforts were all part of local governing bodies trying to adhere to the Centers for Disease Control and Prevention guidelines.

McLaughlin also said they are trying to get everyone used to “social distancing” and reminding residents of the executive orders Gov. Greg Abbott issued on Thursday. Those call for statewide limiting of public gatherings to no more than 10 people, as well as banning in-person dining or drinking in restaurants and bars but allowing for delivery, drive-thru or pickup options.

"This executive order does not prohibit people from visiting a variety of places, including grocery stores, gas stations, parks, and banks, so long as the necessary precautions are maintained to reduce the transmission of COVID-19," the governor's website states.

The governor also banned visits to nursing homes, retirement or long-term care facilities unless to provide critical assistance, and shutting schools down for the duration of the orders. They expire at 11:59 p.m. on April 3.

“The governor is spot on – in my opinion – on everything he is trying to do to stop the spread of the pandemic,” McLaughlin said. “The big one being, ‘Stop the mass gatherings of more than 10 people.’ Well, when you get a line of people that are shoulder-to-shoulder and it's 500 long, I’d consider that a mass gathering.”

A frustrated McLaughlin posted a message to the city's Facebook page Friday morning after seeing the long line at HEB extending down Kleberg Avenue. In the post, he urged residents to "get serious" and "stop the panic buying and line forming."

Commenters pushed back by pointing out that not all of the shoppers in line were panic buying, but just trying to get day-to-day items they have been unable to get for days. They also claimed that a portion of McLaughlin's post where he wrote "if the COVID-19 virus is in our community, it's in the HEB line that extends all the way around the front and down along Kleberg" was causing more panic, not helping to alleviate it.

The city manager clarified in a subsequent post that he was just pointing out that having a massive group of people "standing shoulder to shoulder is exactly what this virus thrives on to transfer from people to people."

He also reiterated that there are still no confirmed cases of COVID-19 in Kleberg County, though collecting of samples from individuals with symptoms associated with COVID-19 is set to begin on Saturday at Dick Kleberg Park's Recreation Hall. Only individuals who have been recommended to visit the site by a medical professional will be allowed access – no one can just show up and ask to be tested.

McLaughlin said the best thing for residents to do is to limit the amount of distance between people as recommended by the CDC, which the city was able to help with by sending police officers to HEB this morning.

“We’re just reminding people to get a little bit further apart,” McLaughlin said in his interview with The Kingsville Record. “The simplest of things we are asking (residents) to do have a huge impact.”

Madrid said he is also “pleading” with residents to allow time for senior citizens to do early morning shopping so they may get what they need first.

“We are asking people to reserve the hours from 8 a.m. to 9:30 (a.m.) to allow senior citizens to utilize HEB and Walmart,” Madrid said. “The whole idea of providing them this isolation is because they’re more vulnerable to catch (the novel coronavirus) than your average healthy person.”

While early shoppers have been dealing with long lines, the experience for individuals who have been arriving later in the morning is less of a wait.

“It was definitely not as bad as I was expecting,” local resident Luis Melendez said after leaving HEB late Friday morning.

Melendez said he has seen stores in other towns “much less organized than HEB has kept it here in Kingsville.”

“I saw the KPD here, and it looked like they were keeping an oversight on things,” he said. “And the people seem like they’re starting to become more orderly in their shopping and I’m hoping that it stays this way.”

Roxann Cortez, another HEB shopper on Friday morning, said she still “wished people would calm down, but it’s okay.”

Cortez said she was able to find most of the items she needed, though eggs were still hard to come by. She was happy to see HEB employees constantly stocking the shelves along most of the aisles, she said.

“It had been a little scarce, but I’m glad to see all of the stuff that’s come in today,” she said.

Cortez said before COVID-19, she would go to the grocery store “practically every day.”

“Because we cook a lot at home,” she said. “But I try not to come as often, so we’ve been stocking up just a little bit more. Not that much, but enough for the week.

This is a developing story. Check back to www.KingsvilleRecord.com for updates.