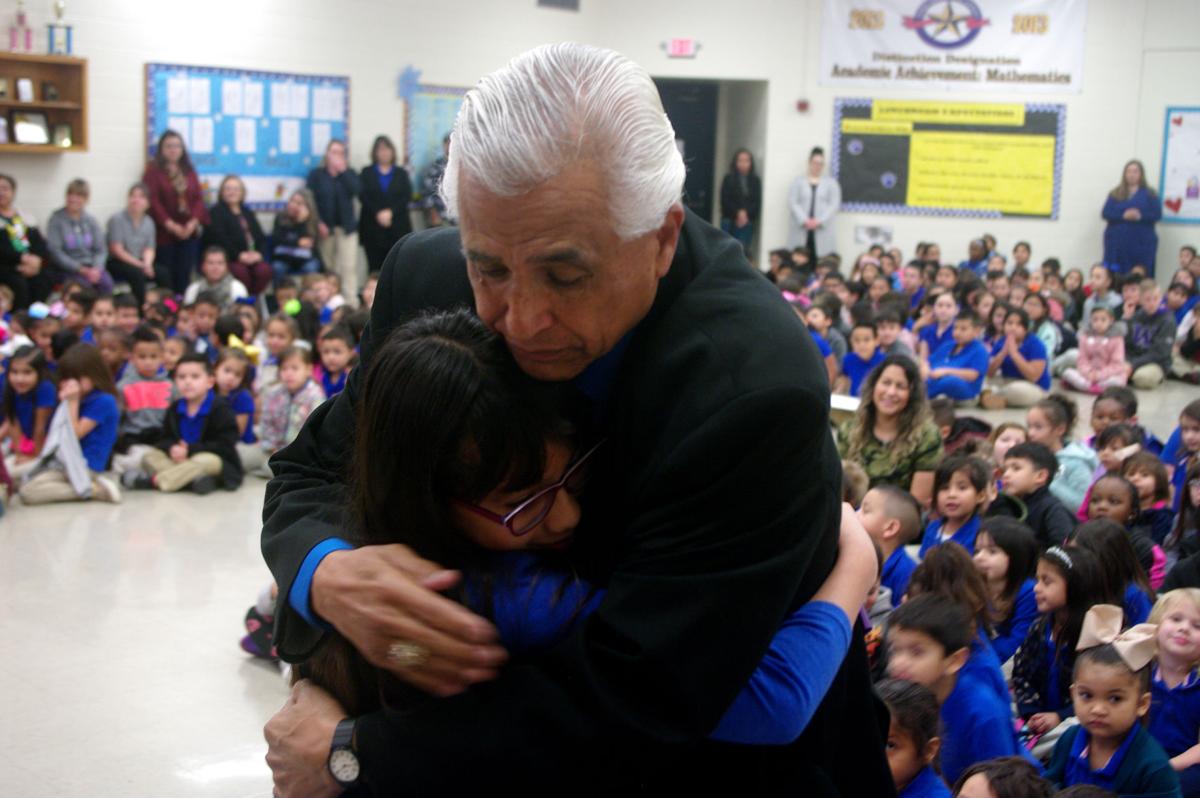 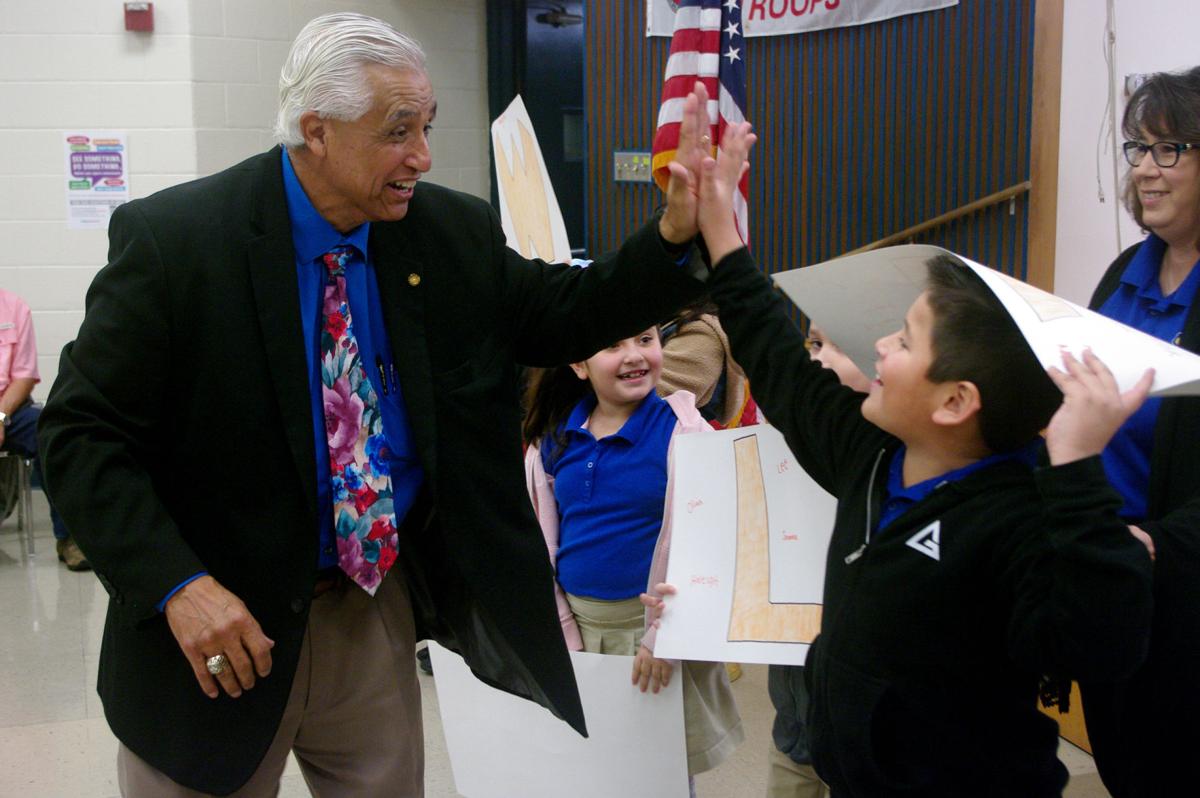 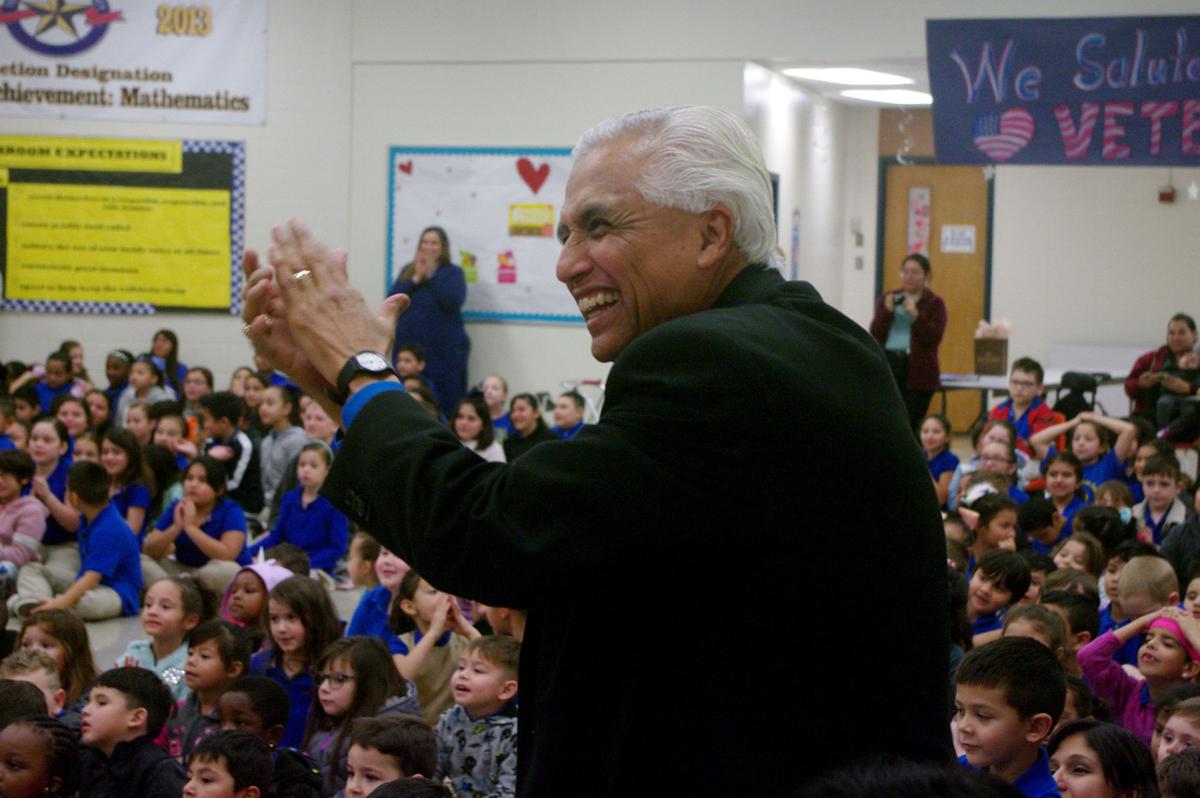 For more than half a century, Leo Ramos has been a familiar face with the Kingsville Independent School District.

Starting as an elementary school reading teacher in 1968, Ramos made educating Kingsville youth his life’s work as he served at almost every one of the district’s campuses as either an educator or an administrator.

He has also served as a mentor to youth and colleagues alike, imparting the knowledge, experience and life skills that he’s accumulated through his lifetime as an educator.

On Wednesday, after 51 years with the Kingsville ISD and 52 years in education, the 76-year-old retired from his current position as the Perez Elementary School principal so he can devote his life to spending more time with his family, especially his grandchildren.

“I’ve been a grandfather for a lot of these youngsters here, and now it’s time to be a 100 percent grandfather to my two granddaughters,” Ramos said. “I’ve not been able to do that as much because my devotion has always been to the campus. Now, I’ll have the time.”

Originally from Raymondville, Ramos said he had always wanted to be an educator. It was chance that brought him to Kingsville in 1961, at the age of 18, as he was looking for a college to attend.

Ramos joined his friend on the 72-mile drive to Kingsville and then-Texas A&I University, which he said was not only a “great college” but also much more affordable than his hometown options.

By comparison, Ramos said he was able to take 16 credit hours at Texas A&I for just $50 total.

“I took it immediately,” he said. “And that’s how I would up in Kingsville.”

During his time at Texas A&M, Ramos earned his Bachelor of Science in Education and later a master’s degree along with certifications in principalship and superintendency.

Ramos spent his first year as a teacher at Calk Elementary in Corpus Christi but returned to Kingsville in 1968 to join the Kingsville ISD.

After 10 years of teaching, Ramos joined administration in 1978 and served as an H.M. King High School assistant principal for 11 years. He said during that time, he was not able to be promoted any further because of the district’s nepotism policy.

“I married a Kingsville girl, and her first cousin got elected to the school board,” he said. “So that got me.”

In addition to his KISD duties, Ramos also taught education classes at Texas A&M University-Kingsville in the evenings and weekends from 1993-2001.

“I taught teachers who wanted to be administrators,” he said.

One of his former college students is Harvey Elementary School Principal Ode Moreno, who took classes with him while earning her bachelor’s and master’s degrees at TAMUK.

“He’s been my mentor for almost 30 years,” Moreno said.

Moreno also worked with Ramos for many years as his assistant principal at Memorial Middle School, as well as at Harrel Elementary School.

“He’s a very compassionate man and has always treated me with the upmost dignity and respect,” she said. “He taught me a great deal and while I’m sad to see him leave, I’m grateful for everything he’s done.”

While Ramos served as campus principal, he would rarely be found in his office during a typical school day. Instead, he would walk the halls and join students and teachers in the classroom to observe - and many times participate - in the lessons.

“Ever since I’ve known him, he’s made it a point to not be in his office,” Moreno said.

“By doing that, you become visible,” Ramos said. “The students know who you are. You talk to them, visit them in class and sit next to them. If they’re working on a project, I’ll go in and share ideas with them and help them out.”

Ramos said communication is very important, and he always wanted his students to feel comfortable coming to him for any reason.

“And not be afraid or timid to come and talk to me,” he said. “I want them to feel like they can come to me with any concern because I will talk to them, and I will listen to them.”

With his retirement, Ramos will be leaving Perez Elementary School which he helped raise from a “C” rated campus in the Texas Education Agency’s 2018 accountability ratings to the district’s only “A” rated campus in 2019.

“Plus we earned all five distinction designations that we could earn,” he said. “That was my goal, and seeing that happen made me feel good.”

KISD Interim Superintendent Kamara Adams said Ramos will be “greatly missed” by everyone in the school district.

“He’s been the grandfather of the district,” Adams said. “For everyone, it’s going to be a big void to fill.”

“I don’t know if anyone could ever fill his shoes, but I am so excited to be on this campus,” Tennyson said. “I love the elementary level and it makes me so happy to be here.”

Looking back at his more than 50 years in education, Ramos said it still feels like he started only yesterday.

“It went by fast,” he said. “It really did. I guess when you enjoy what you’re doing, you don’t realize how much time has passed.”

Ramos thanked the Kingsville community, especially the KISD staff, parents and above all its students, for making his 51 years with the school district “so rewarding.”

“I don’t regret one day of it,” he said. “But I feel now is the time. I’ve got another life, and that’s going be my home life. But I’m still going to try to help out in the community if possible.”