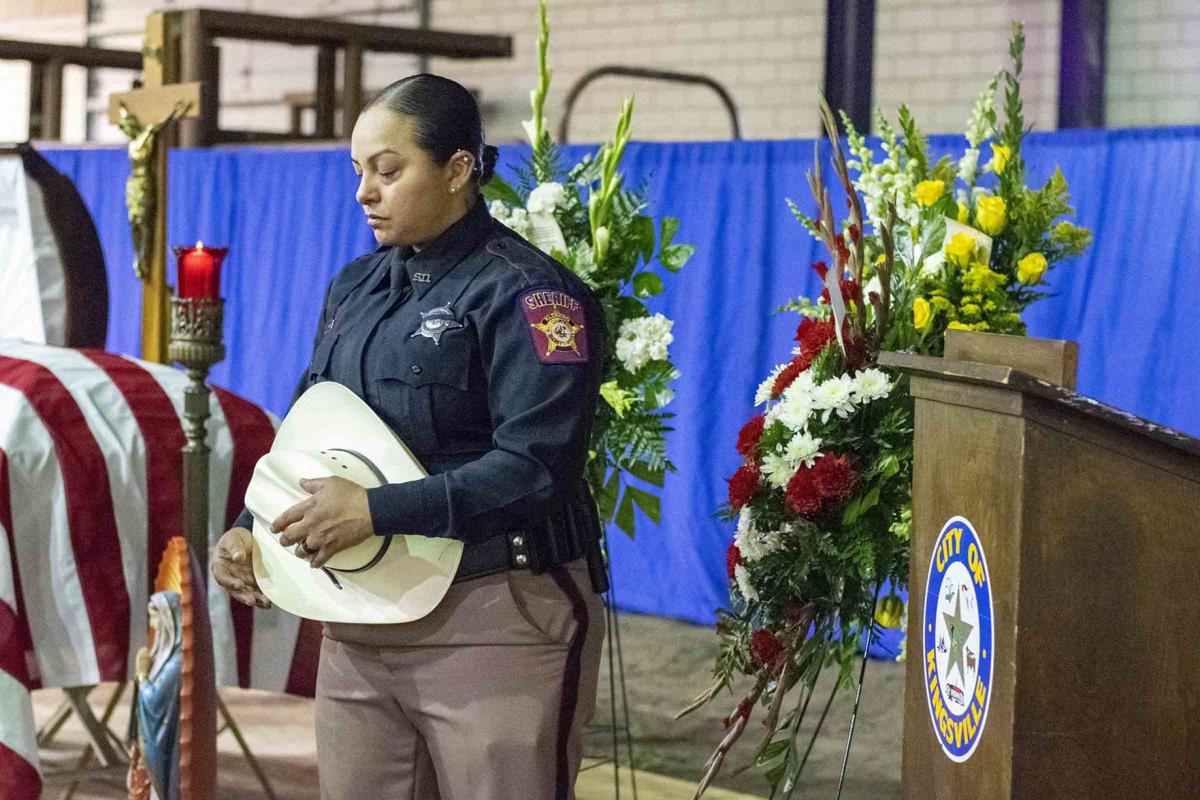 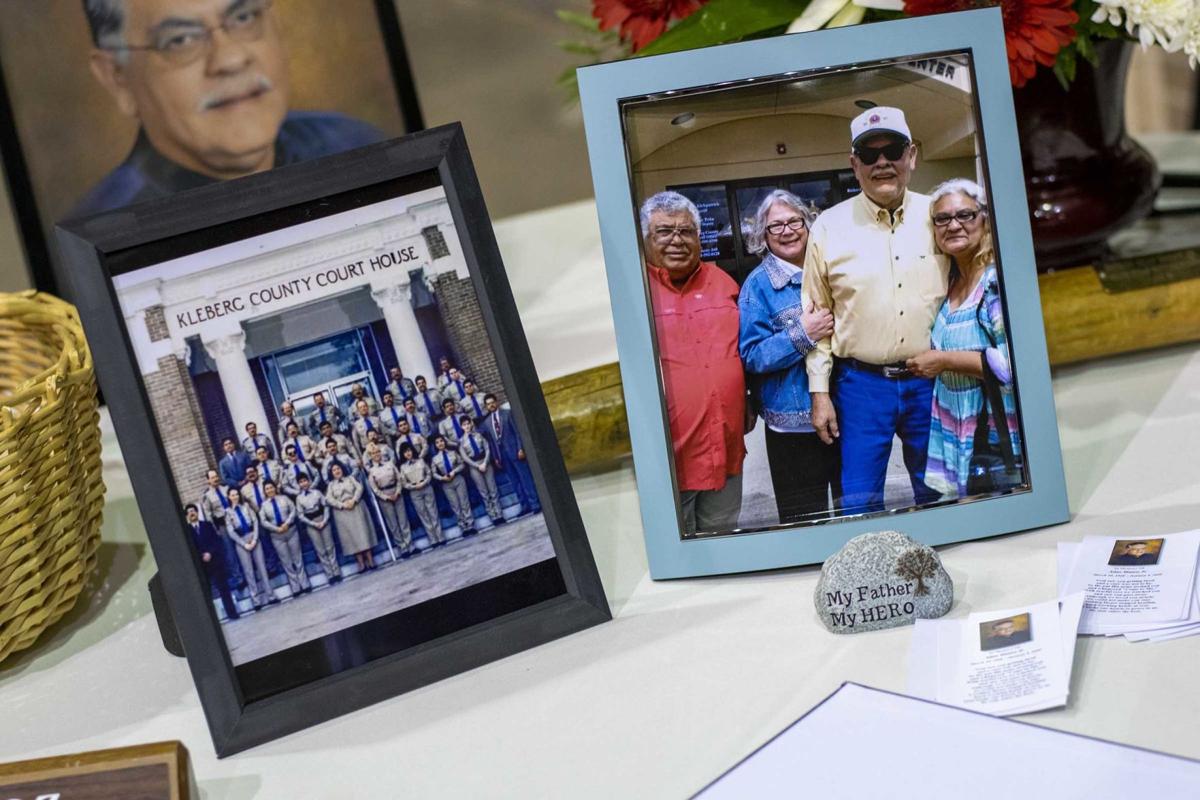 Photographs and mementos of Adan Muñoz Jr. were placed near the entrance of the J.K. Northway Exposition Center.

Photographs and mementos of Adan Muñoz Jr. were placed near the entrance of the J.K. Northway Exposition Center.

Family, friends and colleagues will remember former Kleberg County Sheriff Adan Muñoz Jr. as a man of hard work, integrity and loyalty to those he cared for the most.

Hundreds gathered at the J.K. Northway Exposition Center on Tuesday evening to honor the legacy and life of Muñoz through the words of the people who knew him best.

Adan’s son, Albert Muñoz, recalled the days of his childhood when his father worked tirelessly to provide not only for his family, but the people he served in the community.

“Even at the beginning of his career, my mom said that he was always putting in extra hours and I remember him being gone a lot,” Albert Muñoz said. “He wanted to provide service to Kleberg County. It was hard, because he worked so much, but we also saw that he was making a difference in people’s lives.”

But when Adan Muñoz Jr. was off the clock, Albert remembers his father as his baseball coach, which Albert said he will always treasure most.

“That was one thing that we really had in common,” Albert Muñoz said. “He was a star at H.M. King, he went on to play college baseball and even got drafted by the Astros,” Albert said. “Baseball was a big part of his life. He was even a batboy for the King Ranch Baseball team. That was our connection away from work for him.”

Albert also jokingly shared stories of the respect his father wanted his children to have for others, even when seeing individuals in Kingsville, and Adan made sure he and his siblings “greeted and spoke to every person they had ever encountered.”

“We’d be out in public with our friends and we’d see friends of the family, and if we didn’t acknowledge them, by the time we got home, you know, phone calls were already back to the house. ‘I saw your son or your daughter,’ and he would ask, ‘Did they say ‘Hi’ to you?’ If we didn’t we would get in trouble. It’s funny to think about, but it was also about respect.”

Muñoz’ daughter, Andrea Muñoz, said her father was all about discipline and structure, as he was with his job in law enforcement.

Andrea said she is grateful for everything her father taught her and both of her brothers, Albert and Adan III.

“We didn’t suffer because my dad worked so much,” Andrea said. “And so as a person, that’s what we got from him. As far as both my brothers and I, we’re all hard workers. We are very disciplined in what we do. And so, if anything, that’s what he gave us personally. He gave us what he represented, which was strength and perseverance and loyalty and discipline.”

Both Andrea and Albert agreed it was humbling to see so many people on Tuesday attending services for their father, and the outpouring of support from individuals who have reached out to them over the phone or through social media.

Bill Colston Jr., a long-time friend of Muñoz, said he will always remember his friend as “one of a kind.”

“There’s no one that’s ever been like Adan Muñoz and no one will ever be like Adan Muñoz,” Colston said. “He came from very meager beginnings and he made something of himself and he was a man among men.”

Adan Muñoz Jr. advanced in his career to become the first Hispanic sheriff of Kleberg County and held the seat from 1988-1994.

“He ousted a family that had served as sheriff for three generations, and people saw that we needed a change,” Colston said. “They elected him sheriff and he was a (great) sheriff. Adan was a good family man. He loved his family, he loved his wife and he loved his friends. He was a great man.”

His leadership was vital to the passage of a $4.5 million bond that paid for the law enforcement center that would later carry his name.

Current Kleberg County Sheriff Richard Kirkpatrick said Muñoz was the person he learned from the most in his career.

“Adan was my mentor, and certainly gave me my first law enforcement job back in the early 1990s,” Kirkpatrick said. “And you have to sit and ask, ‘Who was Adan Muñoz and what did he stand for?’ And I think it’s all of the people who share in his vision and his mission for law enforcement and the betterment of the community.”

Kirkpatrick recalled being one of the selected few to work with Muñoz when Muñoz created the South Texas Specialized Crimes and Narcotics Task Force, which he said helped him become the sheriff he is today.

“Adan was a special person. Sometimes he was hard to work for, but that led to the respect and how much all of us in that time period respected the man for who he was and what he brought to the table,” Kirkpatrick said, “And that’s what set the precedent for what we now still hold today.”

Richards hired Muñoz as executive director of the Criminal Justice Division in 1994. After Richards lost her re-election bid, Muñoz worked in the Office of the Attorney General until 1998.

Former Texas Attorney General Dan Morales spoke of his past working with Muñoz and said he was one of the most impactful members of his office.

“He was probably one of the most respected law enforcement professionals we had in the office and we’re all going to miss him,” Morales said. “There’s no question in my mind that he retains a great deal of respect among the law enforcement community.”

“He commanded a level of respect among elected officials throughout the state,” he continued. “I mean, he was as respected in Dallas and Houston and the panhandle as he was in South Texas. And I think that’s due not solely to his professional accomplishments, (but) I think more importantly, because of who he was as a person and who he was as a man. I was blessed to have known him.”

In 2006, Muñoz was the first Hispanic hired to be the executive director of the Texas Commission on Jail Standards where he worked until his retirement in 2012.

In March 2018, the Kleberg County Law Enforcement Center was renamed in honor of Muñoz during a ceremony in which the new signage was unveiled, along with a plaque with his photo and biographical information that was placed at the site.

“To see him honored in this way, I’m just speechless,” Andrea Muñoz said. “Because of the fact that he made an impact, it’s just an overwhelming, humbling experience to know that this is our dad. And this is what he did for everybody.”