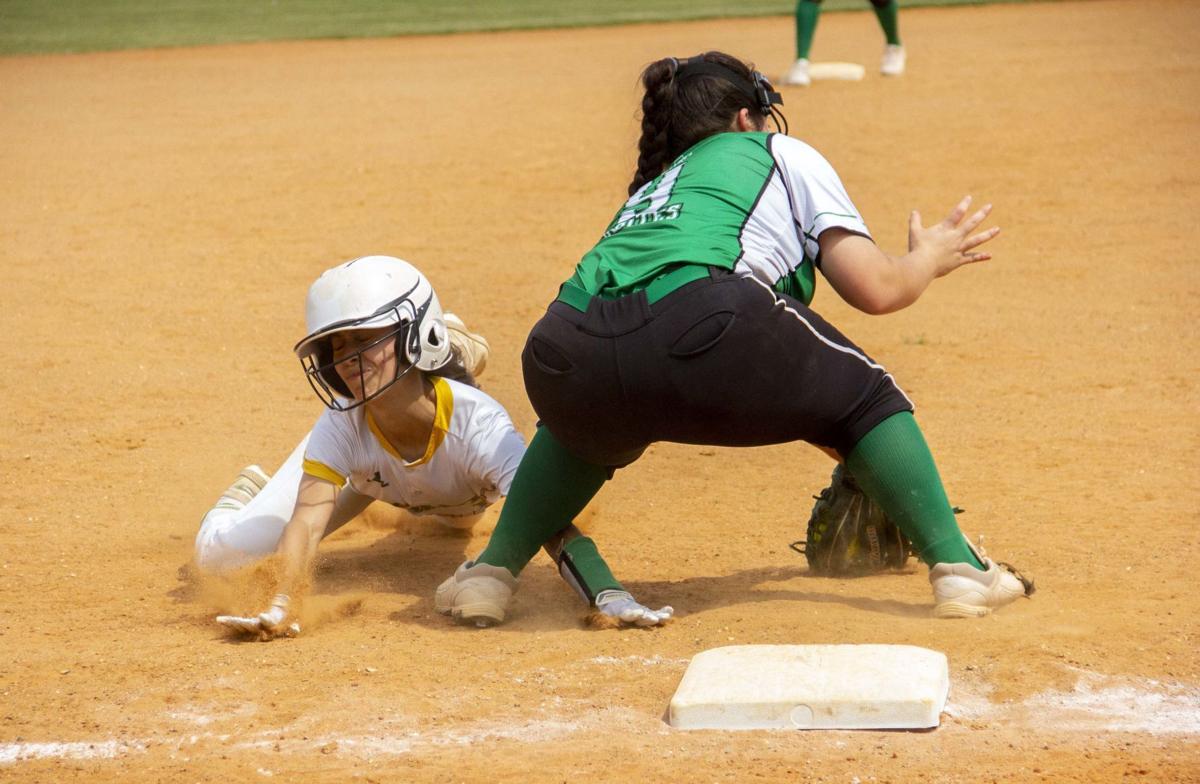 Lady Badger senior Leeann Hinojosa slides to third in the win against Falfurrias on Friday. (Staff Photo by Frank Cardenas) 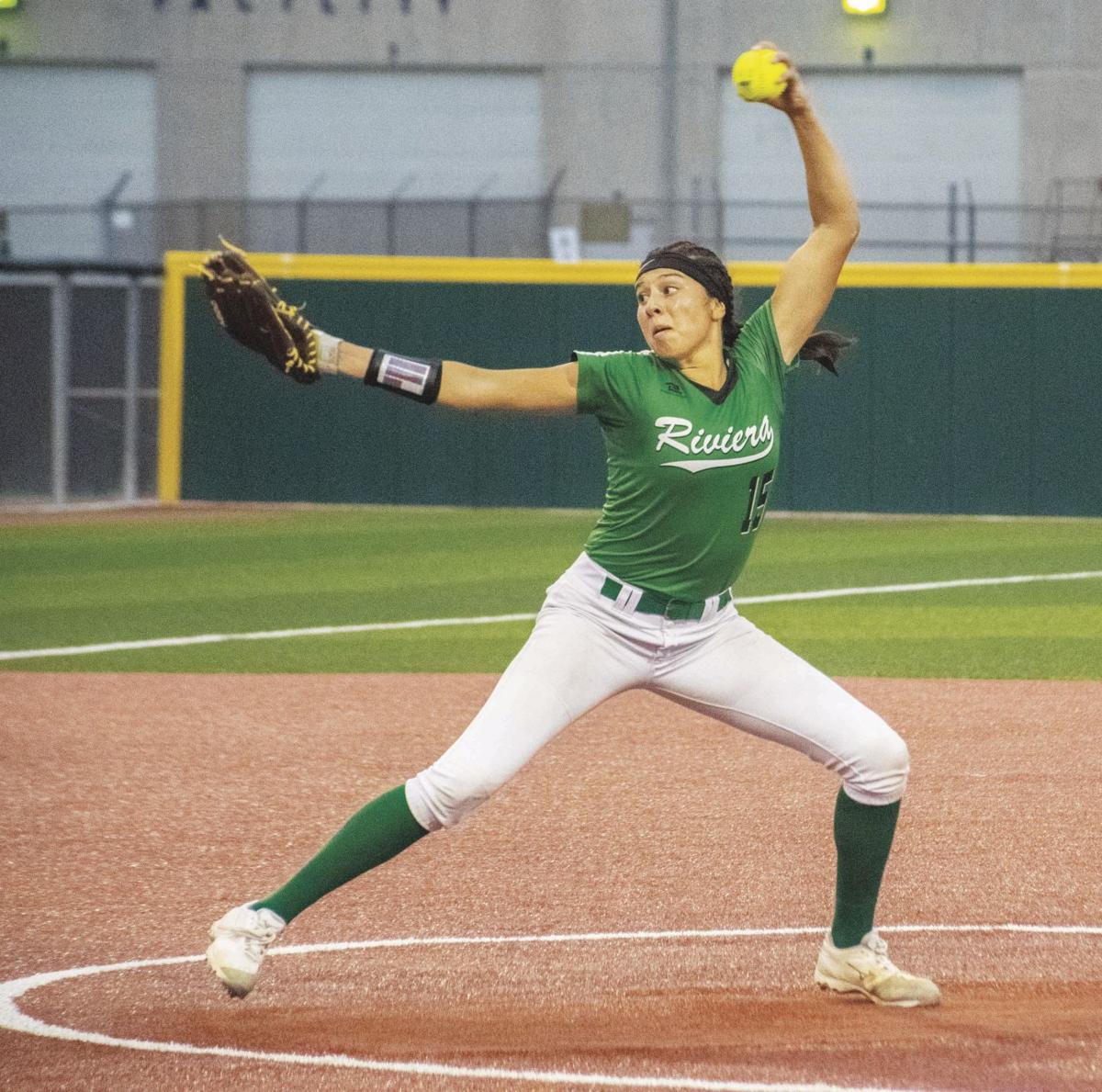 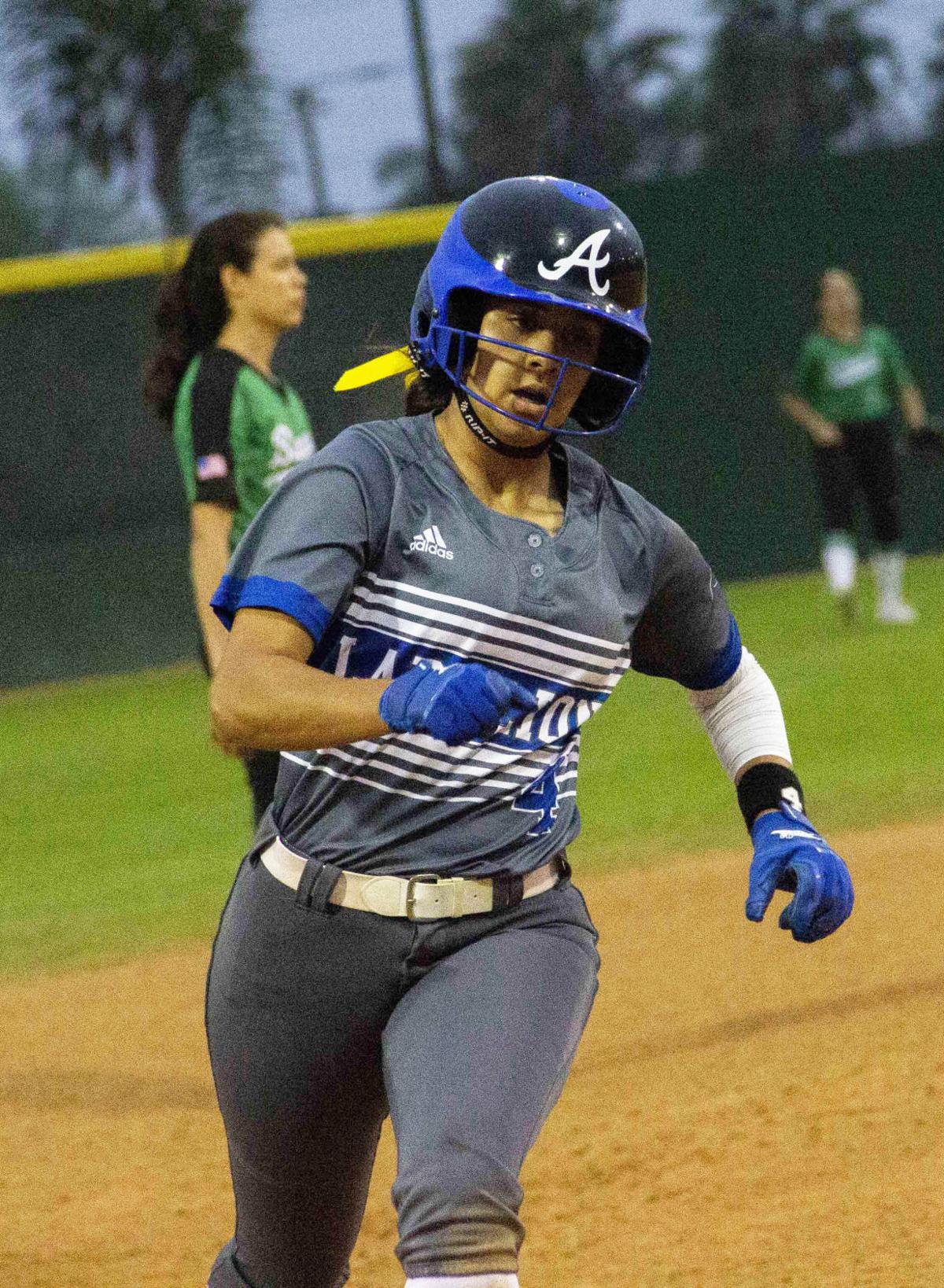 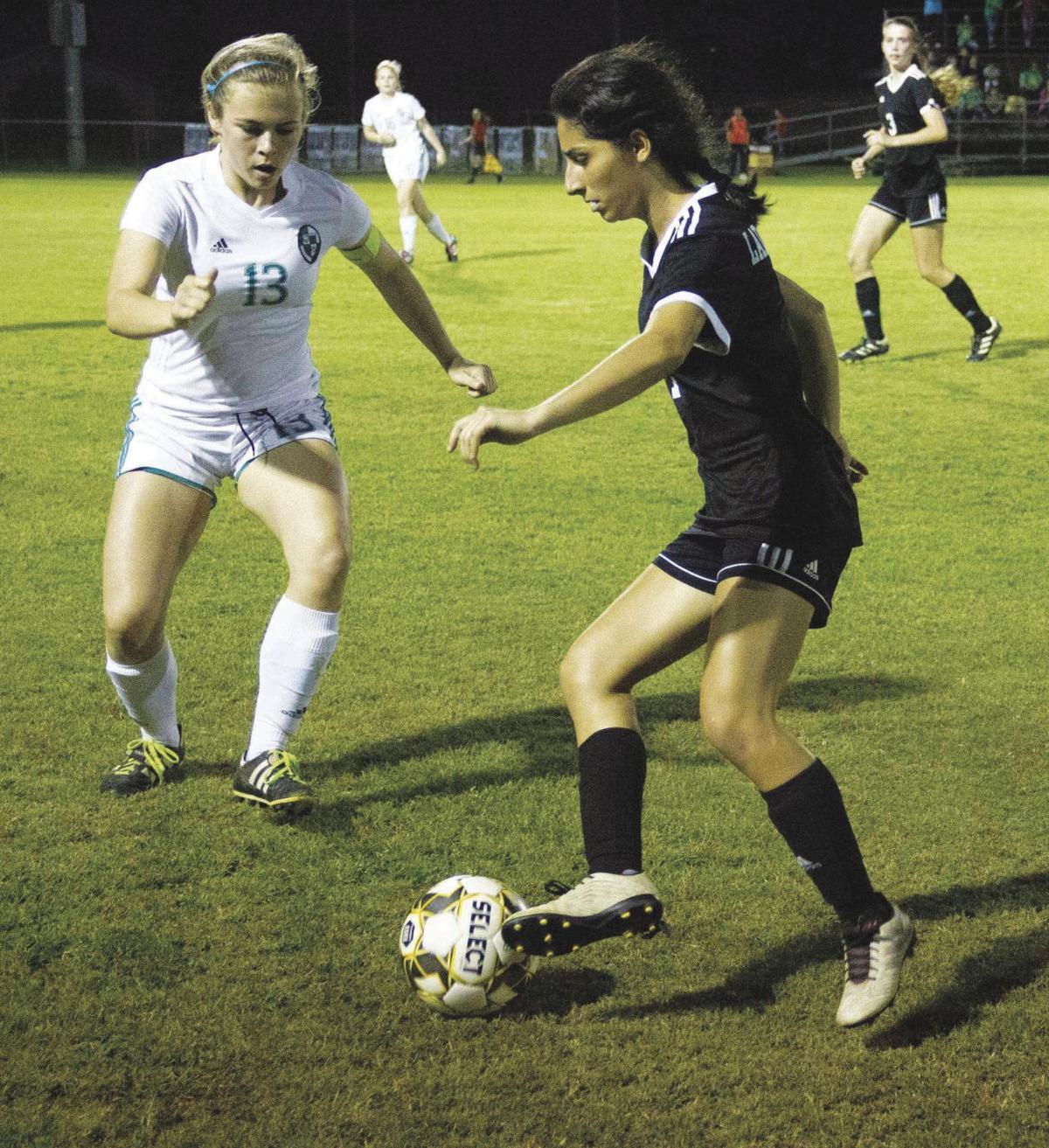 Lady Badger senior Leeann Hinojosa slides to third in the win against Falfurrias on Friday. (Staff Photo by Frank Cardenas)

The world of sports has gone silent amid the spread of the novel coronavirus, with the suspension of high school sports in the area.

On Monday, the University Interscholastic league announced the suspension of all UIL sanctioned contests to include all rehearsals, practices and workouts through March 29.

Though the suspension for high school sports is temporary, the potential for a longer suspension, or even the cancellation of spring sports is resting on the minds of the area’s senior athletes.

The soccer season was one game shy of being over for the H.M. King Lady Brahmas, and senior Ella McMahan is sad that her final game as a high school player could be two weeks before she expected it to be.

“I was very excited to be able to play at least one more game and have the chance to enter the playoffs,” McMahan said. “With UIL postponing our games and holding off on practices, it really puts a strain on our confidence and eagerness to play these potential last few games.”

If the rest of the season is cancelled, McMahan said it would be “very difficult for me, my team and my coach to come to terms with it.”

“As a team, we were really looking forward to our last game with (Santa Gertrudis Academy) and a possible playoff game, so it would be extremely disappointing for us,” McMahan said. “Especially because it’s over something we can’t control. Also, since we have worked so hard, I would be upset that we didn’t get the chance to play up to our potential. Personally, I feel the same way, and it would leave me feeling very unsatisfied and unhappy with such an abrupt end to the season.”

“To work so hard to be better and perform better in the sport you love and then to be told we can’t play until further notice is heartbreaking,” Ontiveros said. “I don’t believe this will keep us from getting back into the groove of finishing strong and winning games. We can’t let this hold us down. Hopefully things will let up and we can practice soon.”

For Coby Medlock in Riviera, disappointment set in the moment he heard the baseball season was on hold, just a few days after playing the team’s third district game on Friday.

“There is nothing more that I want to do at this point other than just play the sport that I love,” Medlock said. “Knowing that my senior season is in jeopardy does not sit well with me. I have a few goals that I want to accomplish on the field this year before I’m done, and if I don’t get the chance to do that I would be devastated.”

Despite the break in action, Medlock is confident his team will be able to come back stronger if and when the season starts back up again.

“I believe it will be a little challenging just to get back into the swing of things but eventually we’ll be okay. Our team has come a long way over the past few weeks and I believe our guys will come back with a great mindset that’ll help us get through the rest of the season.”

For softball players Madison Alegria and Brianna Ramirez, the situation is heartbreaking knowing they have to wait to begin the hunt for another playoff berth.

“It breaks my heart knowing that I possibly won’t be able to finish off my favorite time of the year,” Ramirez said. “Softball is my way of life, (and) it saddens me knowing that the season has been postponed. I’ve waited for this moment because this season was supposed to be special. If the season does get canceled completely I would be heartbroken because I won’t have the memories I planned on having and carrying with me for life.”

Alegria shared the sentiment, especially considering she may not get to play the sport she loves with her younger sister ever again.

“If they did end up canceling the rest of the season I would feel as if I didn’t fully complete four years of high school,” Alegria said. “I was really looking forward to playing my last year with all my teammates and my younger sister, but I understand that things happen for a reason. As disappointing as it is, there is not much I can do about it but wait.”

The number one ranked Bishop Badgers baseball team was able to get one last practice in on Monday before the cutoff  of practices for the next two weeks, and senior Criztian Delgado said hearing about the suspension was “a lot to take in.”

“I think the toughest part is knowing how much work we seniors and all our teammates have put in the past four years,” Delgado said. “It is difficult to have this taken from us. Though we understand health and safety are top priority, it’s still rough.”

If the season were to be postponed longer or even canceled, Delgado said the hardest part is knowing he won’t be able to represent BX3 with his brothers on the field.

“We understand the situation, but we just want to play ball and finish the season on our terms,” Delgado said. “It may take a day or so, but I am confident that when this does pass and we are cleared to play, we will be ready to pick up where we left off. Our coaches will have us ready to go when it’s all over, and we will get back to work.”

Sidney Zimmerman and Alyssa Cruz played the inaugural contest for the new Bishop Badger Sports Complex Softball field last Friday. They were a bit concerned when after the game they had to wave at their opponents instead of shaking hands. A few hours later, the suspension was announced and that caught both athletes off guard.

“It’s hard going through all of this after 12 years of hard work and dedication in the classroom and on the field,” Zimmerman said. “We have all been growing up looking forward to these last moments of our high school careers and to see it all get taken away from us in a blink of an is a heartbreak that we can’t bounce back from.”

Zimmerman said she understands the games are only postponed for now, but the thought of the total cancellation is the toughest to think about.

“Cutting my season short because of an unforeseen circumstance makes me unbelievably sad,” Zimmerman said. “Knowing I will never get this time back or be able to make up for the lost time on the field is a very hard pill to swallow.”

For Cruz, the hardest thing is not being able to play softball with her sister, who is a freshman getting her first shot at the varsity level. Cruz said she really hopes the season starts back up again, and is confident her team can pick up where they left off.

“The seniors on the team have been waiting for this season,” Cruz said. “We were excited to play with some talented freshman players. Our team has great potential and not practicing puts a damper on things. (But) I think we will be okay.”

Zimmerman said despite the break, she knows everyone will continue to get work in to better themselves at home.

“I know my girls whether it’s a team practice or not, will be trying to improve themselves in every aspect of the game within these next two weeks,” Zimmerman said. “We all have a good head on our shoulders and know we can’t sit still during this time. No matter how this event turns out, I know Bishop Softball has a very bright future ahead.”

The Lady Lions of Santa Gertrudis Academy have yet to lose a single game since the preseason kicked off a few weeks ago.

The softball team’s hot start, Head Coach Thomas De Los Santos said earlier this year, is the best start he’s seen from his team since they won the 3A State Championship just two years ago.

The momentum will continue to build, but for senior Ariana De La Paz, there is heartbreak in losing your sport if even for a short amount of time, and losing some time for academics as well, while the coronavirus keeps her and her classmates from returning to school.

“Our softball season is being postponed and I think that’s the biggest issue I am dealing with. My team and myself have worked hard and are excited to face competitive teams, and now that is being put on hold,” De La Paz said. “If the season gets completely cancelled, I will be devastated. I don’t even want to think about the season being completely cancelled. I am hopeful there will be a resolution to this soon.”

De La Paz said she’s hopeful the softball team can get back to practice soon, because the potential for another State Title run is within their reach.

“We work well together, we believe in ourselves, we all have a common goal and we will not let this postponement be a barrier to finishing the fight.” De La Paz said. “We are motivated even more to getting back to the practice field soon to get back on our grind.”

SGA baseball players Preston Merriman and Jose “Bubba” Lopez both agreed that this is the toughest time for the suspension to have happened, especially with so much potential they see from their team.

“It’s a really hard pill to swallow knowing that it’s possible we may not be able to finish out the season,” Merriman said. “I will be very hurt if our season gets canceled. Baseball means so much to me, and the team has put in a lot of hard work to get to where we are right now and to know that it may be taken away from us is really hard.”

Lopez said he hopes the virus passes quickly, so he and his team can get back to work.

“It is tough knowing that it is my last season and I won’t be able to play for a while but I feel like this virus will pass over soon and we will be back on the field ready to play,” Lopez said.

Merriman said getting back on the field for practice should be no problem, but in the coming days, he knows his teammates will continue to do what they need to before the suspension is lifted.

“We all have an extremely strong work ethic, (and) I know that we will be able to come back right where we left off because the guys are going to stay in shape during this down time, so we can come back and be successful."